The Model M's draw a lot of power, and send data out in the PS/2 format. Most adapters just map the pins, but don't translate data.

The following adapter is known to work with the Model M: 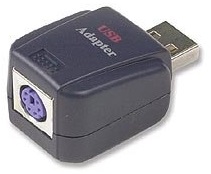 I've used this adapter with both my 1990 made by IBM, and my 1993 made by Lexmark with no problems on several different computers, including a few Dells (which apparently are rather finicky about keyboard adapters.)

It's sold by several different names, and comes in rather generic packaging, but it work

You don't want this kind, they don't work (or if they do, they work inconsistently): 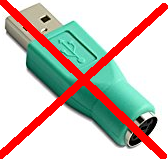 Alternatively, if you don't want to use an adapter, but your Model M won't work with you PS/2 port, (The Model M draws more current than some modern motherboards can output) you can modify it so that it should work by adding a resistor. Details here.